Discover Vaucluse without a car!

This year, you can travel around Vaucluse while your car stays at home! Whether it’s travel by train, bus, or even boat, we’re switching into sustainable mode. It’s time for an adventure that benefits the planet and that minimises carbon impact.

2 possible end points: Bollène or Orange, according to your preference.

Option 1: arrival in Bollène
At the SNCF station, take the Bollène urban transport line no. 2 into the city. Explore the city by following either the historic route around the lower city or the medieval route around the upper city, which leads you to the Collegiate Church of Saint Martin with its panoramic view of the Rhône Valley and the Cévennes (details of the routes can be found at the tourist office).

From Bollène, you can also embark upon a day trip to Mornas, where you can visit the medieval fortress (guided tours available in season) which towers over the village and offers views of the surrounding countryside all the way from the Rhône Valley to Ventoux! For this excursion, take line 1 Bollène-Orange.

Option 2: arrival in Orange
Travel to the city centre on foot or by using lines 1 and 2 of the TCVO urban transport system, which link the the SNCF train station and the Cours Pourtoules in the heart of the city.

Named the city of princes, Orange has flourished since antiquity and was named a Unesco World Heritage site in 1981.

It was here that the Romans built a theatre with a capacity of 10,000 people, and today its stage wall still stands and is one of the best preserved in the world. It has even been praised by Louis XIV, who stated that it was the “Most beautiful wall in [his] kingdom”. In the north of the town the majestic triumphal arch, a symbol of Roman supremacy both on land and on sea, takes centre stage, and stands as an honorary passage between the ancient city and the land of the dead.
Our tour of the ancient city ends with the Museum of Art and History, where mosaics, cadastral maps, ancient remains and other objects act as a testimony to the significant position held by Orange during the Roman epoch.

From Orange, the Zou line no. 23 allows for a day trip to Châteauneuf-du-Pape, where you can enjoy the city’s attractive streets and the remains of its castle and grand estates.

Note that from Orange, you can escape on a getaway to the Papal Enclave by taking the Zou line no. 3 which connects the City of Princes to Valréas.

In the evening, head for Avignon central station, taking the TER line from Orange or Bollène.

Day 2 – Avignon (and its surroundings)

From the other side of the Rhône, Villeneuve-lez-Avignon beckons to you, inviting you to visit the Saint-André Fort, the Chartreuse monastery and its gardens, and the Philippe-le-Bel tower. It’s an easy journey on line 5 of the Orizo network, taking just 11 minutes.

If you’ve brought your sea legs with you, the Grands Bateaux de Provence allow you to discover the most beautiful structures of Avignon and Villeneuve-lez-Avignon (The Avignon Bridge, the Popes’ Palace, Le Rocher des Doms, the Eiffel bridge, l’île de la Barthelasse and l’île Piot, Villeneuve-lez-Avignon and the Philippe le Bel tower) during a boat trip down the river Rhône. Also available are discovery cruises that include lunch or dinner.

In the evening, head to Carpentras by TER or bus, and prepare for your trip to the Ventoux region.

Days 3 and 4 – Around Mont Ventoux

Carpentras, capital not only of the Comtat Venaissin, but also of strawberries and of the berlingot candy, is the first of many stops dotted around the giant of Provence.

The history of the city is told in many ways: through the Inguimbertine Library-Museum (once a general hospital, which now houses both ancient collections and trendy digital devices), the first-century Roman arch, the Saint-Siffrein Cathedral (15th century), the 14th-century Synagogue (the oldest active synagogue in France), the Boyer Passage (a shopping street crowned by a glass roof), the Halles shopping arcades, the Porte d’Orange (14th century), the Belfry and more.

And on Fridays, when the market takes over the streets and squares, the multitude of scents and colours adds to the charm of the city.

We complete our visit by discovering how to make berlingots, pure sweetness in the form of a triangular pyramid, with various flavours including mint, lemon, aniseed, coffee, and strawberry.

From the town, the Trans’Cove intercommunal transport and regular Zou! bus line services grant access to picturesque villages whose history is intimately linked with Ventoux, the Dentelles de Montmirail in the “Pays de Sault” and the Vaison-Ventoux region. Discover these villages at your own pace, not forgetting to pay attention to the lavender fields, olive trees, cherries or truffles…

You can also head to Pernes-les-Fontaines to behold its 41 fountains, the Ferrande tower, and its craftspeople at work (one of our unmissable experiences😉 ) via Zou line no.13.

For a fun day by the water’s edge or in the realm of comics, head by bus (line 5 Carpentras- Avignon) to Monteux, where you will find the Monteux-Provence lake (with leisure park with pedalos, paddle boards, kayaks, “Funny Jumpy” inflatable water obstacle course, and more!), the Spirou Theme park, and Wave Island.

Want to walk in the footsteps of the Romans?
Head in the direction of Vaison-la-Romaine on Zou line no.11, and discover the antique sites of Puymin and la Villasse. Then cross over the Roman bridge to reach the medieval town. You won’t forget this journey through time any time soon!

If you’re a lavender enthusiast, than hop on Zou line 12 and head to the Pays de Sault. The fields are waiting for you! The famous lavender field in front of the village of Aurel can be reached by taxi.

This programme around Ventoux is certainly jam-packed, featuring everything from nature walks to heritage sites to theme parks!

To reach l’Isle-sur-la-Sorgue and Cavaillon, the next stages of the trip, take Zou line 13.

Days 5 and 6 – Heading to northern Luberon

First stop: L’Isle-sur-La-Sorgue. Nicknamed the “Venice Comtadine”, this old fishing village gets its unique charm from its small bridges, its water wheels, and its canals which are the perfect place for an afternoon stroll.

Add on the many antique shops (the city is the 3rd best European antiques destination), pretty houses, and the colourful Sunday morning market and your portrait of this small city is complete.

From the heart of the city, you can reach Fontaine-de-Vaucluse and its mythical spring, via Zou line 21 from July 1st to September 30th, or by renting a bike or by taxi during the rest of the year.

For a visit to Châteauneuf-de-Gadagagne (birthplace of the Félibrige) and Thor (with its pretty town centre, caves and the Château de Thouzon), take Zou line 6.

Then head in the direction of Cavaillon, taking Zou line 13.

Located at the foot of the St Jacques hill by the river Durance, Cavaillon, the melon capital of the world (Alexandre Dumas was an avid enthusiast of the fruit), possesses treasures which evoke the Greek, Roman and episcopal history of this city that lies between Alpilles and Luberon. The first century arch, the 14th century synagogue, the 12th century cathedral, the Evêché (bishop’s house), the Agar Hotel (a cabinet of curiosities built on the remains of Roman baths) and the 18th century general hospital stand as testimony to the city’s past.

Fancy a nature-based getaway? Explore the Via-ferrata above the city and the numerous cycling, hiking and climbing trails from the city centre.

From the town, the “pays d’Apt Luberon” can be reached via Zou line 109 , home to the towns of Auribeau, Buoux, Joucas, Murs, Roussillon (and its ochre trail), Rustrel (the Provencal Colorado is located about 2km from the town), Saignon, Saint-Saturnin-lès-Apt, Sivergues and more.

La Tour d’Aigues, situated on the banks of the river Eze and surrounded by vineyards and olive trees, presents visitors with a lovely renaissance chateau and plenty of other little treasures: the Saint Christopher Chapel, the Notre dame de Romegas church, the wash house, the alleys and small squares where the balusters, oratories and other carved decorations can be admired. The historical route takes a more festive turn on Tuesday mornings when the market bursts into life on the Chateau esplanade.

Lourmarin and Ansouis (classed as among the most beautiful villages in France), Cucuron, Lauris, Puyvert or even Villelaure are accessible via Zou line 8.

Top tip: to help plan your visits, you can find maps of all the towns of the Pays d’Aigues here.

Your sustainable trip around Vaucluse is now complete (all good things must come to an end 😉)!

To set off back home, head for the Pertuis SNCF station, where the TER line 12 (June timetable TBC) will take you back to Aix-en-Provence and the Saint-Charles de Marseille station.

Useful websites
Interactive Zou map, all schedules in real time
OUI SNCF (for getting to Vaucluse)
Zou Railways in Provence and SNCF-TER-PACA (for once on site)

Zou ! M Ticket App: buy your tickets online and access them from your smartphone

Other ways to get around without a car

By bike, on foot, by boat etc 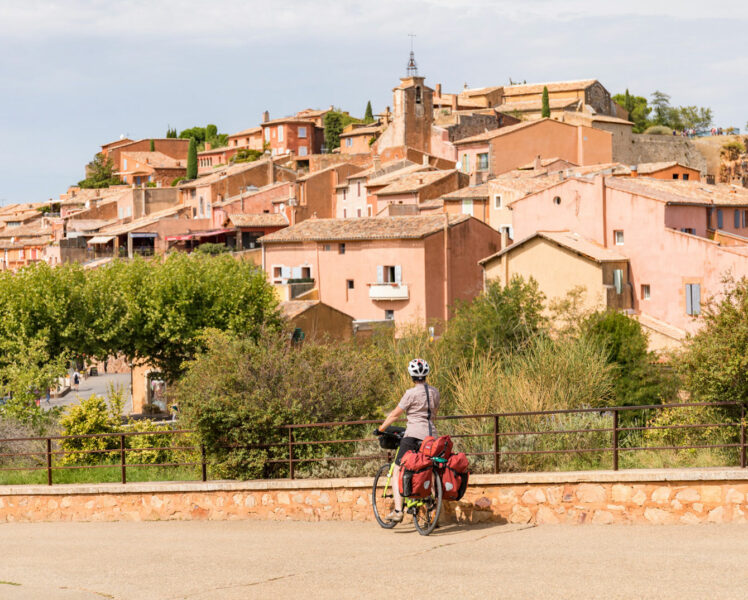 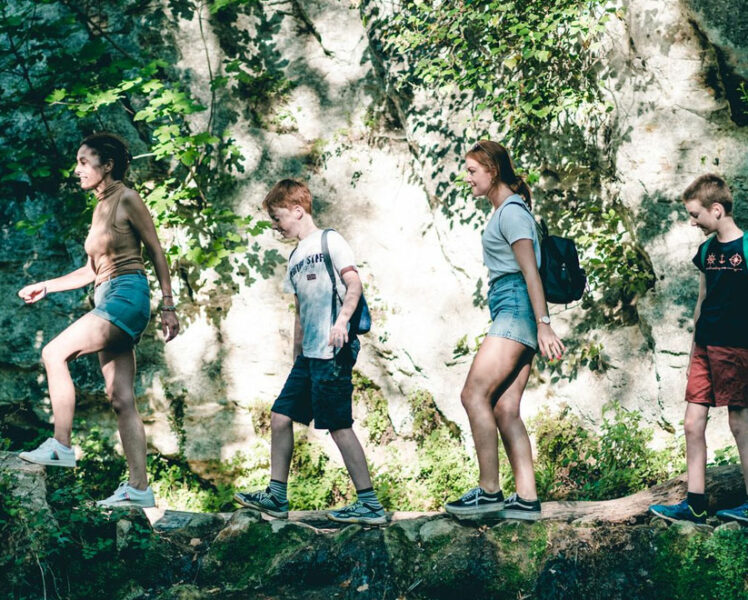 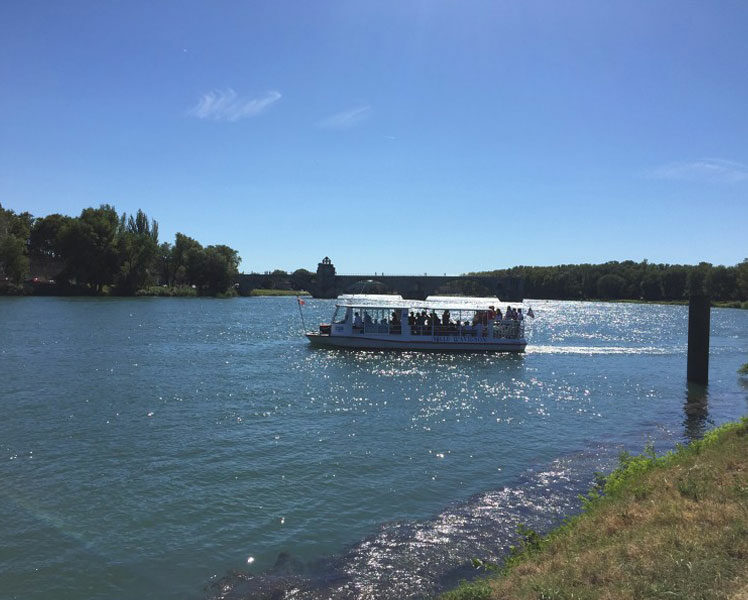